back to Things To Do 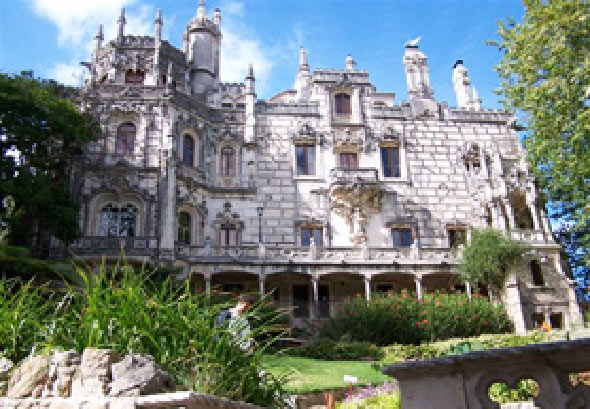 A short 10 minute drive from Quinta do Scoto or a 14 minute train journey from the village station (12 minutes if we run you to Rio do Mouro station). Sintra is a UNESCO World Heritage Town with so many attractions that you could spend a week looking around everything. It is a great place to visit, but has a micro climate that sometimes means that it can be misty until the sun burns through in the late morning. During the summer, it can be difficult to park and, because of the attractions, can be very touristy, busy, bustling, noisy and with more pricy restaurants than you find in and around Meleças. So while Sintra is a great place to visit, it may not necessarily be the best place to stay.

Located in the centre of the historic part of town in the main square and recognizable by the 2 kitchen chimneys. Initially started in the 14th Century, some parts were destroyed in the 1755 earthquake but were sensitively restored. The Swans Hall, the Magpies Hall, the Arab Room, the Blasons Hall, King Alfonso V1 Bedroom, the Chapel and the Kitchen can all be visited but try to avoid getting behind any coach parties as this can be frustrating fighting your way through.

Said to be the most highly rated attraction in Portugal and we totally agree. Quinta da Regaleira is located just a short 10 minute walk from Sintra Historic Centre. The Palace, built in the early 1900s although parts date back to the 17th Century, is not set up with the furniture you would normally expect to see but instead has details of the building and construction. Visit the 3rd floor and search out the secret door into the Library where there is a floating floor with bookcases that fly past the floor that can make you feel as though you have just had a bottle of wine. Some of our guests have said that they felt like getting down on their hands and knees and crawling out. Take the stone spiral staircase up to the roof for great views, assuming you haven't crawled out by then!

The gardens of Quinta da Regaleira are the main attraction with a collection of buildings and features: a Church, Battlements, Parade Ground, Labyrinthic Grotto, Wells, GDR Stables and much more. Most are connected with tunnels where you pop up in different parts of the gardens when you resurface. The Initiatic Well has a spiral staircase within the walls which take you up to where you have to find another secret door and work out how to get this opened in order to exit - or you have to go back down again to the bottom. Described as like Hogwarts from Harry Potter or a natural Disney World where you can spend most of the day being amazed. Allow plenty of time - some of our guests have spent over 6 hours there!

Hanging menacingly over Sintra and accessed by either a 45 minute walk from the Historic Centre or a 10 minute bus (Scott bus no 434 - hop on hop off - for around €5) or car ride with free parking once you get there. The Moorish Castle, or Castle Moorish in Portuguese, has extensive views over Sintra, the National Palace, Monserrate Palace, Seteais Palace, Quinta da Regaleira, Villa Sassetti, the coast and the surrounding area as far as Ericeira and Mafra.

Built in the 10th century to protect the local area and act as an outpost of the City of Lisbon. Extensive battlements follow the undulations of the hillside with interspersed towers. Be careful particularly with children as the battlements are low with long drops. Archeological sites around the castle grounds continue to delve into the historical past particularly around the Church of S. Pedro de Canaferrim. Inside the battlements of the Moorish Castle are located the Keep, the Stables, the Granaries, Cistern and Arms Square.

Or Parc et Palais Pena, stands dominating the UNESCO World Heritage Park and the surrounding countryside. The origins of Pena Palace date back to the 12 th century when a chapel dedicated to Our Lady of Pena was built, subsequently replaced by a Convent and Monastery only to be severely damaged in the 1755 earthquake. In the 19th century, Dom Fernando II bought the Monastery and the New Palace was subsequently built between 1842 and 1854. Often described as the finest example of Portuguese Romanticism, the palace can be seen to have been built in three distinct phases in colourful contrast.

The Gardens of Pena Palace are extensive and beautiful, occupying 85 hectares worthy of investigating, particularly at the extremes which provide astonishing views of the countryside below and beyond. The Gardens contain delights around every corner, with the Fountain of the Small Birds, Tank of the Friars, Manueline Chapel, Water Well, Lake of the Shells, Queen's Fern Valley, Tank of the Seven Pipes, Grotto of the Monks, Fountain of the Preta, Cruz Alta, Fountains Lake, Saint Catherine's Heights, Table of the Queen, Statue of the Warrior, Temple of the Columns, Manege, the Dove Cote House and much more.

An hour's walk from the historic centre or a 10 minute bus (Scott bus no 434 - hop on hop off - for around €5) or car ride with free parking once you get there.

The Palace of Monserrate - a 10 minute drive from Sintra Historic Centre or you can catch the 435 bus - has origins dating back to the 16th Century when a chapel dedicated to Our Lady of Monserrate was constructed. Subsequent development in the park was rendered uninhabitable by the 1755 earthquake, and it was not until 1790 that the beginnings of the Palace itself took shape and in 1856 the Park and Palace of Monserrate were recreated.

Only recently restored in 2013, the Entrance Hall, Gallery, Library, Billiards Room and Music Room are located on the ground floor with the Bedrooms, Chambers and the Main Hall Dome on the 1st Floor. From a distance, the Palace is nestled into the surrounding Heritage Park and looks particularly impressive in the evening when it is floodlit.

The gardens in part, are themed on different countries and are spectacular with 33 hectares to wander around. For something special, take a horse and carriage ride from Sintra Historic Centre to Monserrate Palace with ½ hour for a quick look around followed by the return journey for around €70; negotiate for a longer visit!

Dating back to 1560 as the then Convent of Santa Cruz do Serra de Sintra and inhabited until religious orders were discouraged in the mid 19th century. Sometimes known as the Cork Convent because of the bark from the oaks in the grounds that lines the internal walls; the Franciscan Friars lived a simple life with individual cells, a washroom, kitchen, refectory, infirmary, library and church.

The grounds are much smaller than the other Sintra attractions with many of the park's famous granite boulders scattered around. A 15 minute drive through the UNESCO World Heritage Park from Sintra Historic Centre.